Image and Video Gallery
Ten years after Hurricane Katrina, Tulane University is stronger than ever. Since repairing its own damaged infrastructure, Tulane focused on helping rebuild the community–one project at a time–through a partnership with Johnson Controls.
When Hurricane Katrina tore through New Orleans, family, friends and coworkers lost contact with each other. Johnson Controls could not locate engineer Wendell Wendling. Ten years later, he recounts the turmoil that changed his community forever. 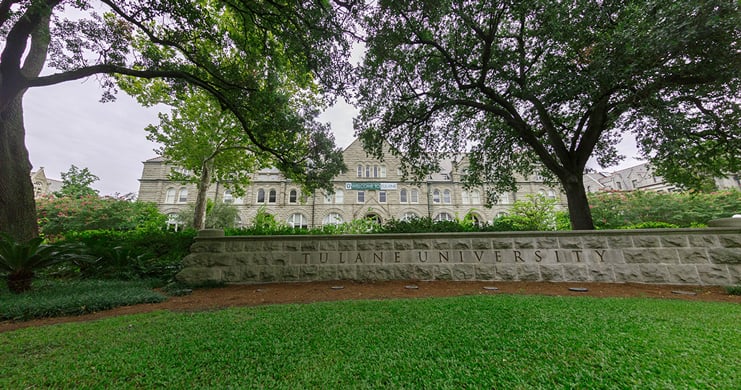 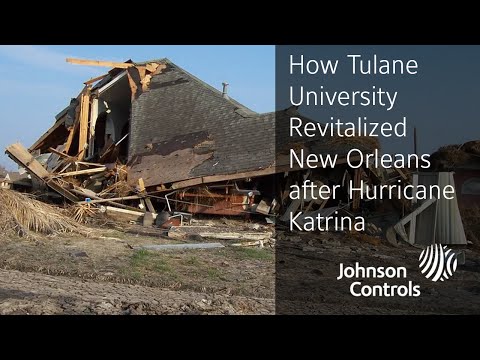 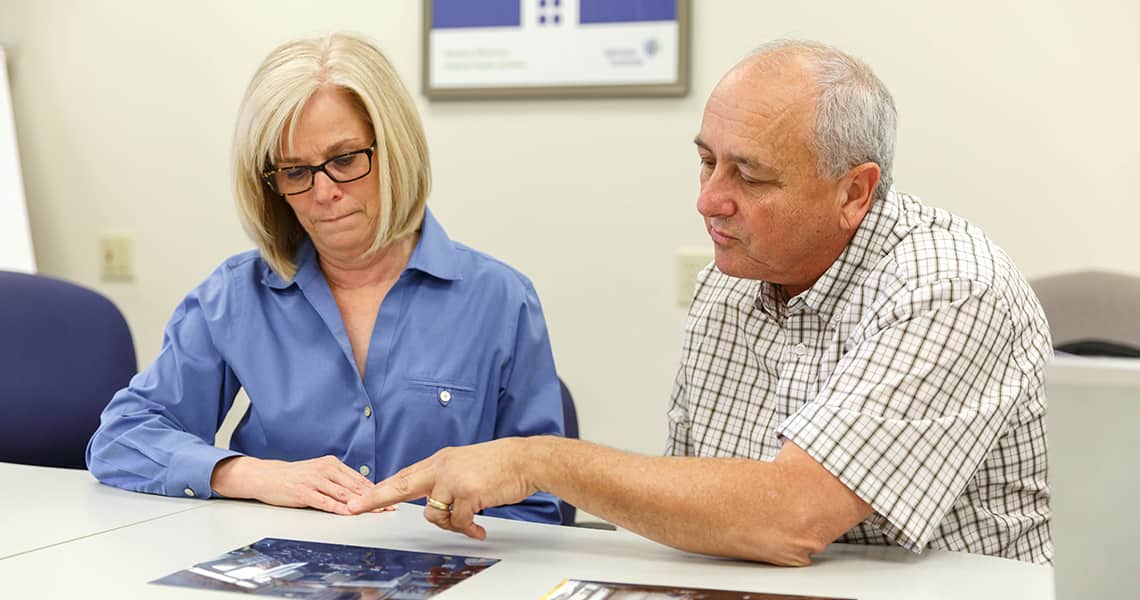 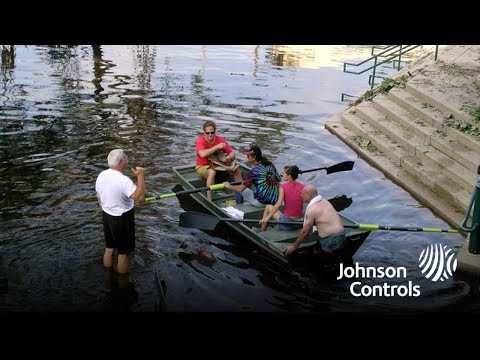 Tulane University, founded in 1834, is one of the most highly regarded and selective independent research universities in the United States. Following the devastation of Hurricane Katrina in August 2005, Tulane committed to rebuilding the university and helping rebuild New Orleans as a healthier, more resilient and sustainable community.

Further committed to being ready for students to return to classes in January 2006, just five months after the hurricane, Tulane worked with Johnson Controls through a $40 million restoration project of its campuses. With its eye on the future, Tulane then entered two consecutive performance contracts with Johnson Controls for facility expansion and improvements, and energy conservation measures at both of its campuses in New Orleans. The result is expected savings of more than $34 million and $37 million, respectively, over the term of the contracts, while significantly reducing Tulane’s impact on the environment and strengthening the local economy.

Hurricane Katrina flooded Tulane’s uptown and downtown campuses, dispersing its students, faculty and staff around the country. Under the directive of university president Scott Cowen, Tulane was to reopen for the following spring semester. To be closed any longercould destroy the future of the university and negatively impact the local economy. As soon as the floodwaters receded, university personnel and Johnson Controls took on the challenge.

Johnson Controls brought in emergency generators to supply over 12 megawatts of power needed to get the $40 million campus restoration project under way. Then as Tulane’s prime mechanical, electrical and plumbing contractor, Johnson Controls took responsibility for rebuilding the electrical and mechanical systems across both university campuses. From ductwork to chillers and lighting systems to electrical panels, over 50 percent of these systems needed to be repaired or replaced to make the university operational in less than six months.

By reopening in January 2006, Tulane put thousands of people back to work, and brought 87 percent of its full-time students back to New Orleans. “To get something like this accomplished takes true partnerships,” says Sylvester Johnson, assistant vice president for Tulane. “I am pleased with our partnership with Johnson Controls, and the quality of work and expertise they provided.”

Even before Hurricane Katrina, Tulane knew it needed to expand and upgrade facilities at the uptown campus to accommodate the university’s growth and operate more efficiently. A study done with Johnson Controls revealed that if the university were to upgrade older facilities and add more resident housing, its central plant would need to be expanded in order to heat and cool them.

Still recovering from millions of dollars in losses from the hurricane, Tulane was not in the financial position to make the necessary improvements. “We didn’t have the borrowing capacity we would have had pre-Katrina and needed a financial solution that fit our circumstances,” explains Doug Harrell, vice president of finance for Tulane. “Johnson Controls worked with us and a third-party to make it happen.”

The solution was a shared savings agreement within a 12-year performance contract. Savings realized from improvements made under the contract are used by Tulane to reimburse the third-party, which owns the assets. If the expected savings are not realized, Johnson Controls is responsible for the difference.

“To get something like this accomplished takes true partnerships. I am pleased with our partnership with Johnson Controls, and the quality of work and expertise they provided.” Sylvester Johnson Assistant Vice President

capacity by 50 percent and efficiency by nearly 30 percent. The new central plant serves more than 40 facilities and houses a new Logistics Department. In addition, the building itself was constructed to withstand a Category 5 hurricane, and has a built-in command center for use by key operations personnel in the event of an emergency.

“This was a fast-track job, completed in just 10 months,” says Larry Smith, director of architecture and engineering services. “Johnson Controls performed in a very efficient manner and we are very pleased with the results.”

In addition to the central plant, Johnson Controls retrofit nearly 1,500 light fixtures and installed over 4,000 new ones in eight dormitories. Occupancy sensors were installed in dorm rooms to control lighting, and lighting in the student recreation center was upgraded. “Aesthetically we made a big improvement. Lights are softer and more pleasing to the eye. We also reduced our energy costs, which is in keeping with the university’s mission to conserve energy,” says Heather Hargrave, director of facilities services, finance & operations at Tulane.

Overall improvements will reduce natural gas consumption by more than 2 million therms and water consumption by 20 million gallons annually. Annual CO2 emissions will be reduced by more than 119,000 tons. Tulane is expected to save $2.85 million in utility costs annually for the 12-year duration of the performance contract. A Johnson Controls performance assurance engineer is onsite to ensure the new systems and equipment are operating as efficiently as possible.

Tulane’s commitment to energy efficiency and sustainability didn’t stop with its main campus. Situated in the heart of downtown New Orleans is the Tulane University Health Sciences campus, which is home to the School of Medicine – one of the oldest in the United States. A second, 11-year, performance contract with Johnson Controls is designed to bring Tulane more than $2.4 million in utility savings annually through facility improvement measures on campus.

In the 5 years since the disaster resulting from Hurricane Katrina and as a result of remediation and renovation of downtown buildings, it became abundantly clear to the leadership of the Health Science Center that certain components of building infrastructure were in need of replacement and upgrades. An evaluation of the cost to make the improvements was completed, and the analysis concluded that the University would have to finance the project rather than pay on a current basis out of cash flow.

“Various strategies for this financing were reviewed. Johnson Controls offered the performance contracting strategy in which energy cost savings resulting from the upgrades could fund the expense. Their proposal included energy savings guarantees. By such a contract, current University funding and future NIH or CDC funds could then concurrently be used for laboratory and building renovations,” said Michael A. Guidry, associate senior vice president facilities services / operations, Tulane Health Science Center.

“Improvements in energy efficiency, environmental conditions for occupants of the buildings, and increased interdisciplinary laboratory space will be the outcomes of this plan. In addition, both the Johnson Controls project and the stimulus funding from ARRA has funded additional and new construction and engineering jobs. This project has been a “win-win” for the University and for local businesses.”

The 18-month project includes a complete overhaul of the medical school’s HVAC infrastructure designed to correct the negative air pressure condition in the building. The project includes installation of a cooling tower, water pumps, boilers, air handling units, switchgear, ductwork, and YORK chillers and variable frequency drives among other equipment.

Additional upgrades include new air handling units, an exhaust system, and an expanded duct distribution system at the student dormitory. The chilled water system in the Tidewater building, which houses the School of Public Health and Tropical medicine, and administrative space will be converted to variable flow. Water conservation measures including low-flow fixtures and faucet aerators, and lighting retrofits including occupancy sensors will be conducted at the Medical School, dormitory and other select facilities on campus.

Tulane’s efforts have already gained attention. Following its dramatic rebuild after Hurricane Katrina and substantial improvements to its uptown campus, the Association for the Advancement of Sustainability in Higher Education (AASHE) presented Tulane with the Campus Sustainability Leadership Award.

The award recognized not only Tulane’s numerous green initiatives to conserve resources and protect the environment, it also recognized a commitment to the social and economic dimensions of sustainability. For example, the Tulane School of Architecture has been engaged in designing and building new, more sustainable housing prototypes in several neighborhoods. Johnson Controls has made a 10-year commitment to support the program.

The program is yet another example of how Tulane University and Johnson Controls continue to work together to help rebuild New Orleans as a healthier, more resilient and sustainable community.